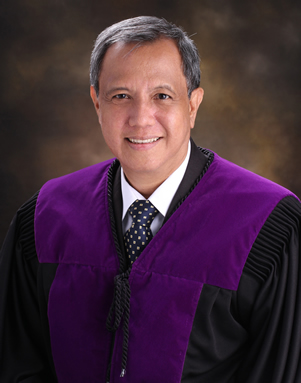 Presiding Justice Del Rosario is also a member of the Board of Trustees of Philippine Judicial Academy (PHILJA) since March 2013. Also, as a member of the PHILJA Corps of Professors, he is solemnly committed to the duties and responsibilities of a Professional Lecturer.

Presiding Justice Del Rosario obtained his law degree from the University of the Philippines College of Law in 1981. He took and passed the Philippine Bar Examinations in the same year with a rating of 85.55%. He earned his undergraduate degree in AB Economics from the University of Santo Tomas. In 1998 and 2000, Presiding Justice Del Rosario attended and completed the Harvard Law School Program of Instruction for lawyers.

After a brief stint with the Bureau of Internal Revenue as Technical Assistant to the Planning and Policy Service Chief, Justice Del Rosario joined the office of the Solicitor General (OSG) in 1983. He started as a Trial Attorney I and, after successive promotions, was appointed in 1994 as Assistant Solicitor General, with the rank of an Associate Justice of the Court of Appeals.

Presiding Justice Del Rosario headed the team representing the Anti-Money Laundering Council (AMLC) since its creation in 2001 until 2010. The AMLC prosecutes civil forfeiture cases, freezing of bank accounts and other properties, and bank inquiry proceedings. He attended various fora, both locally and abroad, as speaker and participant particularly on the role of the OSG in the litigation of anti-money laundering matters.

From June 2006 until March 2013, he also served as the Executive Director of the Special Committee on Naturalization tasked to process and approve applications for administrative naturalization of aliens.

On November 7, 2014, Presiding Justice Del Rosario was given recognition by the University of the Philippines, College of Law, for his distinguished achievements that contribute to the national development, for his uncompromising dedication to the profession and public service, and for his fearless advocacy of the Rule of Law.

On March 16, 2016, Presiding Justice Del Rosario was recognized for his invaluable service as lecturer during the Multi-Sectoral Investment Forum on Government Initiatives: Ensuring Investors’ Protection conducted by the Office of the Ombudsman in partnership with the British Embassy of Manila.

For his outstanding contribution in the drafting of the Rules of Procedure in cases of civil forfeiture, asset preservation, and freezing of monetary instrument, property, or proceeds representing, involving, or relating to an unlawful activity or money laundering offenses under Republic Act No. 9160, as amended, and for his active prosecution of anti-money laundering cases as the first head of the Office of the Solicitor General’s Task Force on Anti-Money Laundering, Presiding Justice Del Rosario was given recognition by the Anti-Money Laundering Council on October 26, 2016.